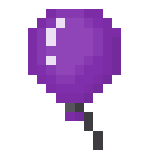 When being shot by an arrow or a trident, it will pop and be destroyed. It drops nothing after being popped. You can smack the balloon with any direction (when tied to fence post) and it won't burst, instead it will give way to the direction you are pushing it from.