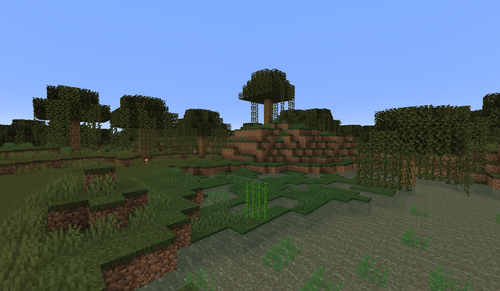 Swamps are mostly flat biomes, with elevations low enough to go below sea level throughout much of the area. Large portions of swamps are flooded, from marsh-like patches of single blocks of grass forming in shallow water, to large lakes, with patches of clay on the lakebed. Water in swamps takes on a gray-green color at the surface, turning pale yellow when submerged in it. Unlike most biomes, swamps have varying temperatures, which affects the color of grass blocks, grass and leaves.

Vegetation includes oak trees, that can grow in shallow water and generate with vines growing on them. Sugar cane is found often growing on shores, while seagrass litters the bottom of flooded areas. Blue orchids may grow among the grass, while lily pads dot the surfaces of lakes; both are found exclusively in swamps. Bedrock Editionでは, huge mushrooms can generate as well.

Swamp huts can be rarely found in swamps, housing a witch and a black cat. Only witches can spawn in and around the hut. Swamps, alongside deserts, can generate fossils, rare structures found underground around Y=50.

Slimes can spawn in swamps at low light levels, alongside common monsters, between elevations of Y=50 and Y=70 (exclusive). Their spawn rate is affected by the moon phase, spawning most often during full moon and not spawning at all during new moon.

Villagers that spawn in swamps get a unique swamp-themed look. While villagers have swamp-specific types, no village featuring these villagers can be generated. The only way for these villagers to spawn is either by being bred in swamp, curing a zombie villager that spawned in a swamp, or when a naturally-generated village spreads into a swamp.

Survival in swamps can be somewhat easy if the player finds a large-enough clearing for a shelter. Wood supply is good without being overwhelming, water is abundant, and terrain is often flat. Swamp huts can also be converted into witch farms, should the player want to easily harvest their drops. However, slimes spawning alongside hostile mobs can make nighttime survival more difficult if the player does not sufficiently light their surroundings.

Swamp biomes are usually found next to other lush biomes, such as forests, dark forests, birch forests, and plains biomes. Like aquatic biomes, swamp biomes undergo little to no change when generated in the Amplified world type.‌[Java Edition限定]

The Swamp biome is the standard swamp variant. Non-flooded areas of this biome feature relatively flat terrain, similarly to plains biomes, though with significantly more trees and less tall grass. Some parts of the swamp may have marsh-like terrain, where the grass has multiple single blocks of water generating within it. At nighttime, depending on the moon phase, slimes may spawn at Y-levels 50-70 alongside other hostile mobs, making swamps the only places aboveground where slimes can be found. Swamp huts and fossils also generate in this biome.

The Swamp Hills variant features hillier terrain rising up between the flat marshes. These hills are generally shorter than the hills in other biomes, though can still tower over the otherwise low-elevation swamp. Additionally, flooded areas in swamp hills tend to reach lower depths than the rest of the swamp, sometimes deep enough to have a gravel floor in place of a dirt floor, like normal oceans. Swamp huts do not generate in swamp hills‌[Java Edition限定], nor do slimes spawn, but fossils may still generate underground. Additionally, seagrass does not generate in flooded areas of swamp hills. If it is connected to a Jungle, it has a chance of creating a Modified Jungle Edge biome

Swamp hills use the same mob spawning chances as swamps.

Note that images with blue water were taken before Java Edition 1.13, which changed the color of water in swamps from blue to gray.