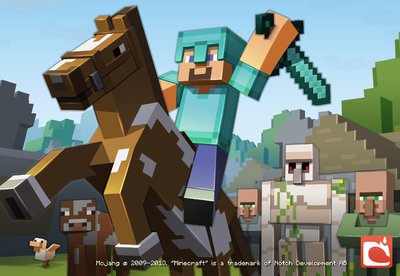 Promotional image (released alongside the update)[1]

Development began the month after 1.5.1 was released. Eighteen development snapshots were released, from 13w16a to 13w26a. During the development period, 1.5.2 was released. Several iterations of the fourth launcher were released during this time period, from 0.1 to 1.2.2. Nearer the end of the snapshot cycle for the 1.6 update, Mojang focused primarily on fixing bugs, rather than adding new features.

The official name for the update – the Horse Update – was only announced a week prior to the 1.6 prerelease on the Minecraft update tumblr (which is viewed in the launcher).

Mojang released the 1.6 pre-release on June 25, 2013. This included an easter egg where mobs named "Dinnerbone" or "Grumm" were flipped upside down. The 1.6.1 pre-release was released on June 28, 2013, shortly before the final release.

A new Minecraft launcher was implemented in this update, with improved LWJGL code and the ability to auto-update.

This update features the addition of horses, donkeys, and mules: three tamable mobs which can be ridden upon and bred, the first of which comes in a variety of colors.

Horses can be fed with hay bales and other food items, and equipped with a saddle and horse armor to ride and protect them. Donkeys and mules can be equipped with a saddle to ride them with and a chest to store items. Leads can be used to walk or tie up any mob to a fence. Name tags allow any mob to be named with the exclusion of the Ender Dragon, and villagers have to be named as babies or else during multi player. This prevents any named mobs from despawning. Golden Apples were slightly nerfed as well, requiring 9 times as much gold to craft now, and give the player a new status effect known as "Absorption".

Carpets were added to cover a floor without raising it an extra layer, like snow cover. Coal blocks have also been added and can be used for compact coal storage and provide more fuel than the coal used to create it alone. Hardened Clay was also added, and can be dyed with the 16 available colors to give decorative Stained Clay blocks that do not burn up like wool does.