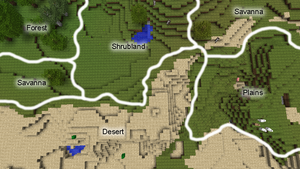 Before the Adventure Update, biomes were much smaller and less distinct.

Biome placement was controlled by temperature and rainfall values, allowing interface biomes and making it nearly impossible to generate desert near taiga or rain forest near tundra while making transitions from biome to biome smoother. Height variation was less dependent on biome type, allowing cliffs and mountains to generate up to 128 y-axis in any biome (new versions only allow tall mountains to spawn in Extreme Hills and Savanna Plateau M). Tall grass was also much less present in pre-1.8 worlds (except in the "Plains" and "Rainforest" biomes).

There were 13 biome types: 10 in the Overworld, 1 in the Nether, and 2 unused ones that are in the code but aren't encountered in normal play.