Mining fossils involves different techniques than mining ores. This is because fossils are only found in certain layers and biomes, and are usually bigger than ore veins. 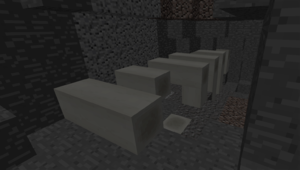 For most players, the primary use of fossils is as a source of bone blocks. This can be especially useful if playing on peaceful difficulty, as skeletons won't be able to spawn, meaning that bones are much harder to acquire. Fossils also generate coal ore, although if you want to find coal ore, it is much easier to just look in a cave. However, if you do come across a fossil and mine it for the bone blocks, it's worth it to mine the coal ore. Coal is very helpful, as it can be used to make torches, or used as fuel.

Bone blocks are often highly sought after for building, thanks to their unique texture. Bone blocks also cause note blocks placed on top of them to produce a xylophone sound‌[Java Edition限定]. One of the most common uses for bone blocks is that they may be crafted into bone meal. Anything that can be dyed, including banners, terracotta, stained glass, shulker boxes, firework stars, concrete powder, and beds, can be dyed white with white dye, which is made from bone meal and certain flowers. In addition, white dye can be combined with other dyes to make secondary dyes, including gray, light gray, light blue, lime, magenta, and pink. The bone meal itself may also be used to grow crops, trees, or create tall grass and flowers if used on grass blocks.

The most important thing when trying to find fossils, is to mine in the right biome. Here is a list of the biomes that fossils can spawn in:

When finding a spot to mine, it's also recommended to mine in a larger biome, so that you have more room in the biome you're in. For example, if you find a swamp or desert biome but it's only 1 chunk wide, that's only 1 chunk of mining space, and it is very unlikely that a fossil will generate in that 1 chunk.

Once you find a spot to mine, it's time to start searching for fossils. You can do this by either caving or mining. Note that fossils will only generate 15 - 24 blocks below the surface, so make sure to always look here.

Caving has nearly the same advantages and disadvantages as it does when mining ores. Caves have lots of exposed surface, which saves you a lot of time and tools by mining. However, it is very likely that caves will be either shallower or deeper than fossils generate, and it is also likely that the cave may lead out of the biome you are mining in.

When caving, always be on the lookout for a bone block, as many times only 1 block will be exposed. Also, if you are in the correct Y coordinates (about Y = 40 - 49, a bit lower for land below sea level, and a bit higher for land above sea level), mine as much coal ore as possible, as it is possible that it is part of a fossil. This particularly goes for if you only see one coal ore, as more than one coal usually do not generate next to each other in fossils.

Mining rather than caving can be useful if you don't want to deal with the monsters in a cave, want to collect lots of cobblestone while finding fossils, or want to make sure you are on the exact Y-coordinates for fossils.

Branch mining is a good way to mine when looking for fossils. Try to find a flat section of a swamp or desert biome. A flat section allows for branch mining without having to dig up or down. This is because where fossils are found in the ground does not depend on the Y-coordinate, but rather how far beneath the ground it is. Once you've found a suitable area, dig down about 20 blocks and start branch mining.

Other types of mining, including strip mining and speed mining, should usually be performed in the same way they would if looking for ores. However, note that they must be performed 15 - 24 blocks below the surface, as those are the only layers that fossils can generate in. TNT mining can also be used, and is often faster than digging with a tool, but doing this method risks damaging and/or destroying fossils.

Once a fossil is found, dig all around it to make sure there is nothing dangerous. Fortunately, lava is the main concern when mining, and lava does not usually generate so high up in the world. Once the fossil is excavated, you may want to take a screenshot of it, as fossils are rather rare, and you may not encounter one again for a long time. Then, start mining the fossil. You can mine both the bone blocks and coal ore with any type of pickaxe, but if you use your hands, it will drop nothing.