As part of the Unified Community Platform project, your wiki will be migrated to the new platform in the next few weeks. Read more here. 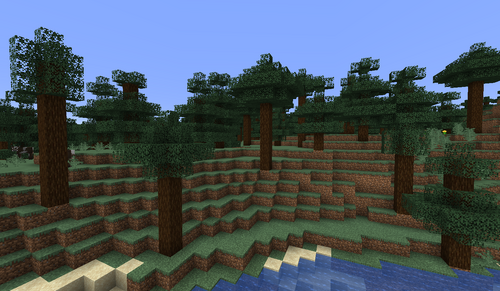 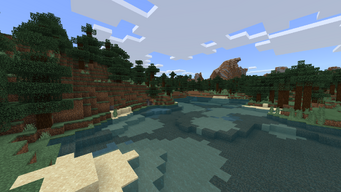 Taiga biomes are essentially a colder counterpart to the lush forest biomes. Only spruce trees may grow in taigas, compared to oak and birch trees in forests. Due to the structure of spruce trees, being more tall than wide, the foliage has an aqua tone and is somewhat less dense than in forests, but still dense enough to possibly get players lost. The terrain is flatter than in forests, though still slightly hilly. Wolves spawn commonly in all taiga variants, making wolves plentiful in taigas. Rabbits additionally spawn in taigas, though are not often seen due to wolves chasing after them and killing them. Foxes, ferns and sweet berry bushes can also be found in taiga biomes. Villages occasionally generate within the taiga and are appropriately made of spruce wood. Due to the cold climate, rainfall changes to snowfall above layer 120 within taigas; however, this rarely happens within the normal taiga, as the terrain is not usually steep enough to reach the snowfall line.

Like forest, taigas are one of the most preferred biomes to start out in. The abundance of wood, mild terrain and useful passive mobs make this biome easy for players. Generated villages can also serve as a handy refuge and as a trading post should one be found. Taigas share the same dangers of forests, however; a player can get lost within the trees easily if they don't mark their trails, and the foliage can lead to obstructed vision, especially at night. This biome and its variants also generate as border of giant tree taiga biomes, except if generated next to snowy taiga. Taigas are commonly found next to mountains, plains and forest biomes, and much less commonly next to snowy taigas.

Like forests and jungles, taigas also generate unique shallow lakes. Fish (mob) do not spawn in these lakes.

There are a total of three different taiga biome variants.

Taiga is the standard taiga biome variant, featuring a forest of spruce trees. Here, villages and outposts may generate, and wolves and foxes may spawn.

Taiga Hills, like all other hills biomes in the game, feature steeper terrain compared to the base taiga biome. The increased elevation makes snowfall more likely to appear within this variant, typically at the tops of trees or tall peaks. Villages and outposts do not generate in this biome‌[Java Edition限定], though wolves and foxes still spawn.

Taiga hills use the same mob spawning chances as taigas.

The rare Taiga Mountains variant are much steeper than the taiga hills, with peaks frequently crossing the snowfall line. The steep terrain makes this a more difficult version of the regular taiga. Like the hills, villages and outposts do not generate here, though wolves and foxes still spawn.

Taiga mountains use the same mob spawning chances as taigas.